What this means is we only need 10% of the population to understand how these few individuals are robbing us and enslaving us to transform the narrative society believes in, to stop them.
Roots of US Fascism
Intermingle with
Nazi Germany
OPERATION GLADIO
has become the NATO
terrorist Army
US DOLLAR COLLAPSE
EXPLAINED
WORLD BANK's
Karen Hudes brings Light to the economic Shadows
Preparing for the Ongoing Empire Collapse
Financial Source of Global Debt Infection
The Corporate Oligarchy's Latest Secret Attack is called TISA
From the JFK assassination to 9/11, to today's crisis
It's ALL a Rich Man's Trick
ARTICULOS EN ESPAÑOL
THE PEOPLE vs the BANK OF CANADA
Commentary by Rafael Zambrana                                            September 6, 2015

Oligarchy Using Democracy
to remain in Power
WAKE UP CALL
New World Order
Obama's Artificial
OIL Crisis Boomerangs
back on USA
According to attorney Rocco Galati, Canada is the only country of the G-8 having a truly independent central bank, thanks to Gerald Grattan McGear who was an MP (Member of Parliament) in Vancouver while the Cabal of Financier families had come to Canada at the time of the Bank of Canada creation, and made sure the statutes of the bank were placed to protect Canadians, not to benefit the Cabal of foreign crooks, as the Federal Reserve Board of USA is doing.

What's disturbing is how little Canadians know of this battle taking place at the courts in their own country, especially because of the tremendous implications for their well-being at the middle of a Global Debt Crisis and domestic fascist austerity policies being implemented by PM Stephen Harper.

Galati's explanation of how the banksters and their minions are changing the status of people's money deposited in their bank accounts as if in fact was a loan depositors do to the banks, so it can be more easily stolen by outright confiscation as it happened in Cyprus last year, which he claims it has already happened in Canada, is a wake up call.
Fortunately as explained by solicitor Galati, the bank laws are already in place and all we need is to have a willing finance minister to order the head of the Bank of Canada to continue to offer free-interest loans, as it had done for decades already since 1938 to 1974, to any municipality or province that asks for it.

The Canadian economy has 600 billion more debt generating compounded interest, than the 20 billion it had when the Bank of Canada stopped to produce its own money interest-free in 1974.      Those 20 billion were the result of the bank creating its own interest-free money for three and a half decades!   Basically nothing and it owed it to itself anyway.
In my research as to why the bank stopped producing its own money for the country, I came to the name of John Crow, a British born Canadian immigrant who started working at the Bank of Canada's research department in 1973 after he was in the British Air Force speaking Russian (probably active in spying) and then worked for the Cabal's controlled IMF for ten years concerned with Latin America and later North America, when it became clear Canada's central bank was outside the control of the Cabal's network of central banks BIS.
I imagine it was then, just one year after Crow came into the bank, that at the change of the Bank's Governor Gerald Bouey in 1973, Crow made his move and started the huge debt now the Canadian taxpayer is having to pay more than 200 million dollars PER DAY in compounded interest. 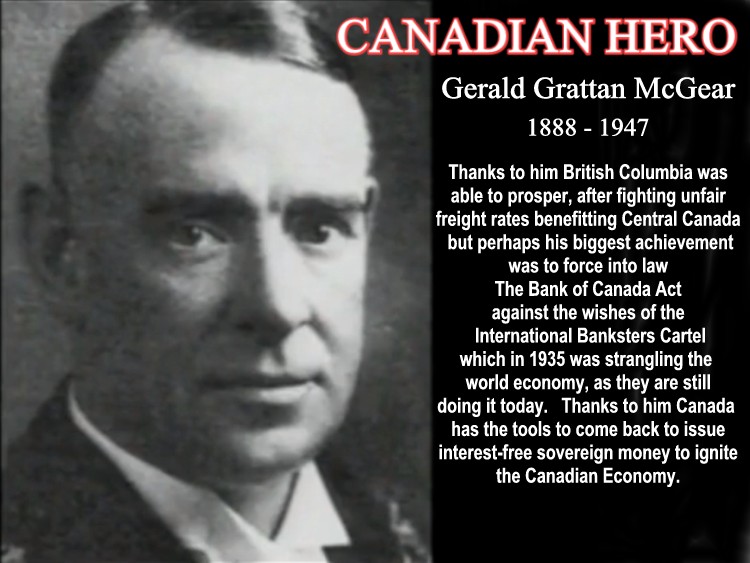 Canadian Federal Debt Clock
OH CANADA    our Bought and Sold Out Land
The documentary "Oh Canada" presents past and present politicians as pathetically ignorant or deceitful of how the current monetary system functions, and the dire consequences of its application